Born on the 28th November 1965 and tragically passed away on 25th July 1976 at the age of 10. At the time, I had no idea the effect my little sister would have on so many people’s lives, then and now.

Katie was born to John and Lois Tasker and was like any other child. In the sixties, life to me was very simple, I was 5 at the time, and I was so proud to have a little baby sister. She was loved and adored by all and she was the first granddaughter to both grandparents, the apple of the eye to all family and friends.

Katie and I grew up in the Doncaster area, a suburb of Melbourne. Doncaster in those days was like a trip to the country, empty grazing land and full of orchards (that’s where her love of butterflies may have come from). She did all the normal things as a little girl growing up, kinder, then school and learnt ballet from her auntie Eileen and Kathy Gorham OBE (dec), a long time friend of the family. Ballet was a passion of hers, so much so she had a hand-painted life size mural of a ballerina on her wall made by our neighbour Beverly Foster. She was strong willed and very determined, as I remember, and she would create incredible bonds with people, like her auntie Irene and god mother Lola Welch (dec).

Our lives changed forever in February 1973 when I had to go to the doctor after a serious fall and Katie, who had not been well for a while, was bought along too, just for a checkup. The doctor saw me first and wanted me to go straight to Epworth hospital; he looked at Katie and wanted tests and x-rays done. Later the next day, whilst I was in hospital, dad came in to see me with an ashen face and cried. Katrina had been diagnosed with Hodgkin’s disease, a tumour the size of my little sister’s chest. I have no idea to this day the anguish and pain my parents were going through, first for me rushed to Epworth hospital, and then the next day their daughter, in the Children’s Hospital, and as I was told at the time, to never come home.

Miraculously, after only some two weeks, Katie responded so well to treatment that she did come home.

The support of friends, family and even people we didn’t really know, was overwhelming. Before Katie’s diagnosis, no one in our circle of friends had ever heard of a child with cancer. One lady said to mum, “Kids don’t get cancer”! People were incredibly generous. I recall that Katie felt like watermelon one day, but watermelons were out of season. Someone got wind of this and, that day, flew in a watermelon from Queensland, especially for her.

From what I can recall, the first 12 months of Chemo and Radio and constant lengthy stays at the RCH was heart breaking so see and live through, the suffering of a little girl as well as mum and dad. Then one day when I came home from school, mum was crying in the kitchen with our next door neighbour. I had no idea what was wrong, our neighbour said to mum “You’ve got to tell him”. With that, I went straight to my room, shying away from the distraught tears that I had seen so often. I was never told and never asked what they were crying about, but deep inside I knew that it was Katie and I felt her time was very short. I stayed in my room for hours, saying to myself “No, this can’t happen; it’s not right, this happens to other people, not us! I prayed every night, I was only 15 and our simple life was going to change forever.


I will never forget the afternoon of Sunday 25th July 1976 and the preceding days but, despite this tragedy for our family, the legacy of a little girl Katrina (Katie) Jane Tasker, CIKA was about to be born. John and Lois Tasker, whose lives had recently been devastated, contacted Karen and Nigel Hayes (who were agonizing over their little boy, Scott) and Stan and Trudie Gorr (who had recently lost their precious daughter Wendy). These families began CIKA. The very first fund raiser was held on on a winter’s day in Ivanhoe where they held a street stall made up from donated bric-a-brac and cakes. Hundreds of dollars were raised, far more than any one had dreamed. I remember some people trying to haggle over the price of an item, and then, once they found out what the money was for, most left the item and just donated.

The story of CIKA needs to be told because the short life Katie Jane has affected hundreds, thousands, if not millions, of people in raising money for the Royal Children’s hospital, for research, support, and for the doctors so that children and families today may not have to endure what we went through.

Life has gone on; it is now over 33 years since Katie passed away. She would have been 43 years old today, possibly with a family of her own. I constantly wonder what our lives would have been like had she survived her cancer and been involved with our younger sister, Naomi, and aunt to Emily, Molly, Paige, Aaliyah and Blake. I am and so proud of my parents and all the people who have had any involvement with CIKA over many years.

A butterfly has a short and beautiful life. This is one little girl that made a difference.

Hodgkin’s disease affects the lymph glands. These glands are in many different parts of the body and are important in helping to fight infection. It is for this reason that glands in children’s necks are often swollen and painful as they are constantly fighting infections in the ears, nose and throat. This swelling goes down when the infection clears. 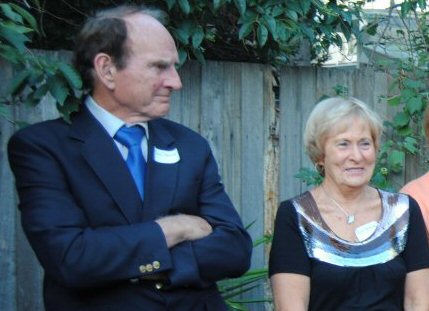