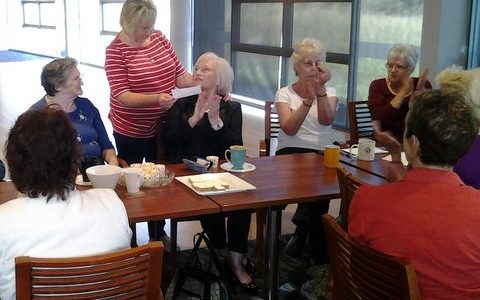 
The generous people at Cardinia Waters Village have recenty joined the CIKA team with a donation of $1395.50. Village resident, Graeme Taylor, provided this report.

It started with a simple luncheon invitation by Ann and Ron Fisher who live in the village and who are volunteers on the hospital CIKA stall, to Pam and Lois. Also at lunch that day were village residents Nell Scalzo and Renee Taylor who are involved in several village activity groups. They knew nothing about CIKA but by end of lunch were well and truly fully informed. At subsequent village activity group gatherings it was decided that the group would support CIKA. This was a project that obviously had hit a chord with residents – and the fact that the village is comprised of lots of grandparents helped as well. So – off they went.

The Stitch and Giggle girls (also known by a less flattering name – not for publication) stitched, sewed and created lots of crafty thing-a-me-bobs. The keepers of the village library book stall sales decided to help. The Wednesday craft group created the most amazing cards for sale. And – together they had a morning tea and sale of craft and other goods as well as auctioning off some major donated items. A total of $1077.10 was gathered from the morning’s activities for donation to CIKA.

Then the Village Singers decided to help and from a Frank Sinatra Tribute Show “Ol blue eyes is back”, a further $318.40 was donated.   Altogether a total of $1395.50 was raised by the groups and a cheque was presented to Pam Phillips at a small luncheon put on by the Stitch & Giggle girls on Tuesday 20 May. All this from a simple luncheon invitation  – and so our network grows – fantastic!

To the residents who have supported the respective group efforts, our sincere thanks.