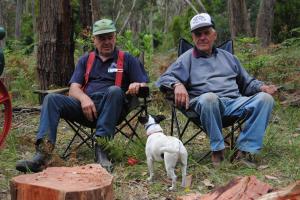 The 2011 Old Time Wood Days was, as always, a great event thanks to terrific planning by Christine and Andrew Dyvestyn. The spirit of fellowship displayed by their band of enthusiastic volunteers and the donation of a huge amount of food, timber, fruit and vegetables enabled the weekend to raise $23,709.60; a magnificent result which could not have been achieved without the help of so many people. We are grateful to all of you. Thank you.

The Wood Days Calender sold out even more quickly than usual raising $10,000; we are very grateful to everyone involved in the production of this fundraiser.

Rod’s Fruit and Vegetables donated a ute load of food for the Staurday night camp dinner which fed 136 guests.

Meat for the Saturday dinner was provided by a group of local farmers.

This year, thanks to the donation of old felled timber, the men got handy with chain saws and fashioned out-door furniture, all of which sold very quickly.

This report, written by Andrew Duyvestyn’s brother, Nick, give some idea of the effort that was put into organising and running this ever-popular event.

Doesn’t the time fly these days? It didn’t seem that long ago that we were at Milltown in 2010 and suddenly we were planning the trip for 2011. Things being a bit quiet at work prompted an extra couple of days of leave and it was decided that the 2011 Wood Days for us would span from Thursday to Tuesday.

We arrived just before lunch on Thursday to find a small band already hard at work preparing for the weekend. From that point on it was a steady stream of arrivals who would spend the entire weekend in a variety of ways, and all with the same vision: to raise as much money as possible for CIKA.

Thursday afternoon and Friday morning saw the arrival of two rather large logs which were removed from a tree that had fallen down in a storm earlier this year. Fortunately it was very close to the Milltown block used for the Wood Days and the hard work of Chris, Matt and Cam Thomas, ably assisted by Chris Fasio, saw the logs winched out of the bush and onto the trailer which slowly transported them to the block. These logs weighed in the order of three tonnes and resulted in a nice stack of timber after being milled on the Lucas mobile mill over the weekend.

The normal displays were enhanced this year by the introduction of a Horse Treader by Andrew Duyvestyn. This machine is fixed to one spot while the horse walks inside it and drives a shaft which can be used to power a variety of implements. For the Wood Days, it was attached to a drag saw and one horse power was ample to cut through a log. The horse worked in short stints over the weekend and, each time it was in use, it attracted a large crowd of onlookers.

A second item which created interest this year was the cutting of slabs from old red gum and cypress logs. The potential usage of these slabs was demonstrated by the cutting of bases and the creation of an outdoor table completely from wood.

These were enhanced by the display of a variety of drag saws which operated for most of the weekend, creating stacks of firewood which was later sold. The saw bench and wood lathe operated as usual and a large number of static displays of wood working equipment attracted interest and provoked much discussion.

As per normal, there were horses in use dragging logs from the bush and also providing sled rides for the kids.

The Saturday evening dinner was again a huge success with well over a hundred people enjoying a magnificent three course meal and listening to music supplied by a local bush band.

2011 saw the Saturday attendance record broken again with well in excess of two hundred people attending and this followed on Sunday by a further hundred and fifty or so.

The 2012 Wood Days calendars all but sold out on the weekend so those who don’t have one will need to wait for another year.

Another very successful weekend saw the final tally without calendars around the $15,000 mark. As stated every year, this could not be done without the hard work of Andrew and Christine and their larger group of dedicated helpers.

It was a great weekend for the children.

There was plenty of time for relaxation …

The Wood Days Weekend is an annual event organised by Andrew and Christine Duyvestyn who have been untiring in their efforts to raise money for CIKA. It takes place over two days each November on their bush block in Milltown near Hamilton in Western Victoria, and has raised over three hundred thousand dollars so far to support research to find cures for the many forms of childhood cancer that continue to devastate so many families.  2018 saw the 23rd Annual Wood Days on November 10 and 11.   The 2019 event took place on November 9 and 10 and  Andrew and Christine are now planning the 2020 event which will mark 25 years of fundraising at Milltown.