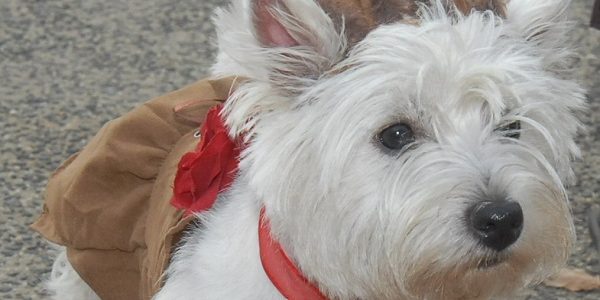 The 2009 Pooches in the Park Dog Show was once again held at the Flemington Neighbourhood House and organised by Anne Dynon of the Flemington Veterinary Hospital. This year it was a twilight affair from 4.00 to 7.00 pm with two bands, two MC’s and lots of fun activities for both two legged and four legged creatures. There was an egg and spoon race, sounds easy but it was a challenge as you had to run holding a raw egg on a spoon in one hand and your dog on its lead in the other. Then there was the fastest dog food eating competition which we had planned to limit to ten entries but the dogs disagreed, they all wanted to be in it. There were two guessing competitions, guess Mia’s weight (a German shepherd with a healthy appetite) and guess the number of goodos and smakos in the jars. All these activities were free and everyone got into the spirit of the day, had lots of fun and contributed lots of money to our cause. Steve Bruce and Adoncia were our two MC’s and they kept the action happening. We had three judges Jim Cusack from the Justice Department at Victorian Government, Betty Harding and her friend Betty who were both bribeable (and collected over $200). Margaret Greenwood‘s Jams and Chutneys, Kate’s Cake Stall, the Pamper Tent, The Rotary Boys with their sausage sizzle and wine tasting, RCH Product and Raffles all did a brisk trade. Everyone said what a great fun day it was, even better than last year. We raised $2824, $490 more than last year. Well done to all our team of helpers.